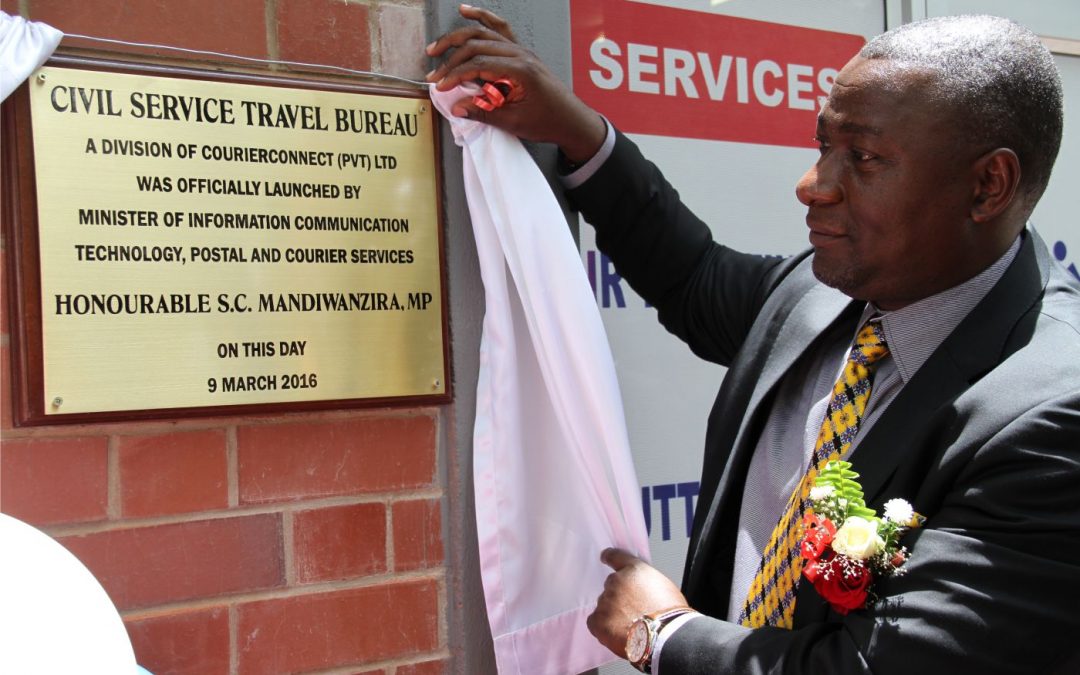 Honerable Supa Collins Mandiwanzira Minister of Information Communication Technology Postal And Courier Services was the guest of houner. On behalf of the Government of Zimbabwe, Honerable Supa Collins Mandiwanzira officially Launched Civil Service Travell Bureau, a division of Courier Connect which is also wholy owned by Zimpost. Civil service travel Bureau was designed by government for gorvenment to service gorvernment and the entire travelling public. .

State owned enterprise, Zimpost’s subsidiary, Courier Connect has operationalised the Civil Service Travel Bureau as part of the turnaround strategy meant to improve the fortunes of the entity. The launch of the Civil Service Travel Bureau as its new business unit, sees the state run logistics firm diversifying its operations in line with its turnaround strategy. Courier Connect Managing Director, Mr Isaac Muchokomori said the new division will be dedicated to offer air travel ticketing services to all government departments, state enterprises and quasi-state institutions. “This is part of our product diversification and turnaround strategy as a state enterprise charged with a responsibility to provide ease of doing logistics business,” he said.

Government, which is currently the biggest traveler, has been engaging private enterprises for all the air travel ticketing and visa facilitation. The implementation of the turnaround strategy comes at a time state owned enterprises have been challenged to implement sound business strategies to stay afloat and to make meaningful contributions to the broader economy. GOVERNMENT is expected to save more than $20 million in travel costs annually following the launch of the first State-owned travel agency, the Civil Service Travel Bureau.Officially launching the CSTB recently, Information Communication Technology, Postal and Courier Services Minister Supa Mandiwanzira said service providers have been charging exorbitant fees to Government. He said this chewed Government funds which should otherwise be channelled towards other social services. “Government has been complaining that its travel budget is too high and therefore we need to start cutting delegations that are travelling so that we live within our means,” said Minister Mandiwanzira.

Some private travel agencies have been claiming that the CSTB was formed in order to drive them out of business but Minister Mandiwanzira said Government will support the private sector if it supports cost cutting measures. “I understand that other travel agencies are screaming loud on why the CSTB is being launched. They say that Government wants to displace the private sector particularly other travel agencies from business. “I do not believe so. I believe the customer will always go where they get the best service and the best price. So the market is still open for other travel agencies, offer the best price to Government, offer the best price to civil servants and offer the best service. You will continue to enjoy your business. But it’s no longer as before. Mutambo wachinja (It’s no longer business as usual). “We have an agency that is looking after Government interests. We need to reduce costs, to serve this economy from exporting money every day by paying money to airlines that are shipping this money out of the country. Of course they are providing a service but we want that service to be available at a competitive price. So if you are a travel agent who feels that CSTB wants to grabbed your business, go and offer Government a better price and nobody will touch you.”

He said CSTB has already received support from the airlines, Government departments and the travelling public. He said the agency is in business. Minister Mandiwanzira directed all functionaries under his ministries to start using the services of CSTB.“I am convinced that BSTB will offer commercially competitive rates and services to all Government ministries, parastatals, State Enterprises and other quasi Government institutions. The travelling officers of Government will still be able to meet their desired itineraries, fly airlines of their choice at much reduced rates. “As a ministry we are excited that this travel bureau will provide convenience to Government for it to meet its international assignments without necessarily cutting down on the number of delegations or reducing the class of travel.“I shall be persuading my colleagues in Cabinet to do the same. If CourierConnect can offer the best price on all tickets and the best service, it will be curious for any official travelling on Government business goes elsewhere for a ticket. It has been reported on several occasions that some airlines have been charging very high rates to Government.” CourierConnect board chairman Mr Tafadzwa Musarara said CSBT is working with LED Travel and Tours as a technical partner and has started the process of IATA registration.“We aim to consolidate the total annual Government, parastatals, State enterprises and local authorities’ air travel requirements and negotiate lowest rates. In the next 90 days we shall be opening two more branches nationwide in order to deliver a wider geographical reach for the convenience of all Government departments and agencies,” said Mr Musarara.

PAY US A VISIT

CALL US TODAY ON!